It is with deep sadness that we learned that our dear friend Kevin Jackson passed away at 6.05am this morning (Wednesday 18 January 2023) at the Sacred Heart Hospice, Darlinghurst.
Kevin personified the term ‘a man of the theatre’. He loved the theatre, and theatre people, and he had a profound impact on theatre in this country, as teacher, director, actor, critic and mentor.
At NIDA for 27 years, then at the Hub Studios and as a private coach, his influence as a teacher was immense. His mantra – the playwright is GOD – informed all his work. He insisted on a rigorous dissection of text, paying attention to every word, every punctuation mark, every character note or stage direction, because that was where you found the truth of the character. His knowledge of plays and playwrights was encyclopedic.
He was feared, admired, loved, and his advice and insight was embraced by anyone wise enough to realise that here was someone whose passion for the craft of acting and the making of theatre would enrich their practice.
In recent years, he extended his activities to his ‘Theatre Diary’, an online blog in which he would post forensic, long-form reviews to productions he had seen (plus the occasional film, opera, ballet and book). Take some time to visit and read his always-insightful, always deeply personal and passionate and erudite responses.
Kevin will be missed by many at New Theatre, where he directed twelve plays: Enemies by Maxim Gorky, 1978; Queen Christina by Pam Gems, 1990; The American Clock by Arthur Miller, 1992; Chekhov in Yalta by John Driver and Jeffrey Haddow, 1993; The Boys in the Band by Mart Crowley, 1994 (our very first Mardi Gras production); Our Country’s Good by Timberlake Wertenbaker, 1996; Misalliance by George Bernard Shaw, 1996; Don Juan Comes Back From The War by Odon von Horvath, translated by Christopher Hampton, 1997; The Woman in the Window by Alma de Groen, 2005; The Voysey Inheritance by Harley Granville-Barker, 2006; and The Temperamentals by Jon Marans, 2012. Kevin also acted with New Theatre, as the Arthur Miller character in the 1993 production of Miller’s After the Fall.
He was a great supporter of ‘the New’ and understood our unique place in Sydney’s theatrical landscape. He once quipped: “When I was starting out as an actor, there were two theatres where you could ply your craft: if you were Catholic, you went to The Genesians, and if you were a Communist, you went to New Theatre. I was both, so I had double the opportunities!”
Rest in Peace KJ.
[Images: Kevin Jackson; The Temperamentals, 2012, photo Bob Seary] 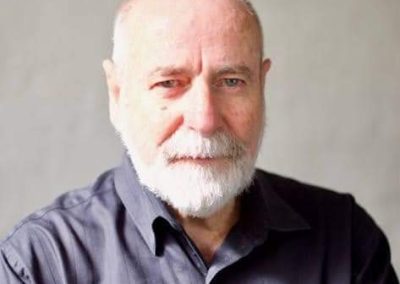 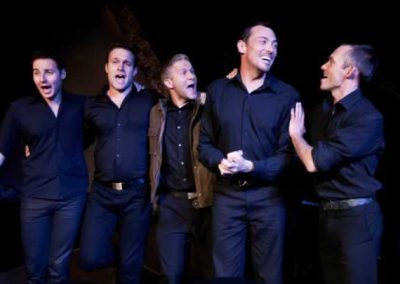